Valerie has taught the Duncan technique at the Isadora Duncan Foundation and Steps on Broadway in New York City, as well as at schools in Princeton, NJ, Gainesville, FL, Annapolis, MD and the Washington, DC area.

Dancing since age three, Valerie originally studied ballet, tap and jazz at schools and companies such as the Virginia Ballet, the School of Performing Arts in Orlando Florida, Brigham Young University and the University of Florida. She also acts in musical and play productions along the East Coast.

Valerie currently resides in Maryland, with her son, Luke. Valerie is a Teaching Artist with the John F. Kennedy Center for the Performing Arts, served as the President of the Word Dance Theater Board of Directors (www.worddance.org) and earned a Master's of Fine Arts degree in Dance at the University of Maryland in 2012.

She has taught Duncan Dance/Free Movement for the Academy Ballet School at the Maryland Hall for the Creative Arts in Annapolis, at Imagination Stage in Bethesda, at Strathmore-CityDance in Rockville, as well as several other dance studios in the Annapolis, Baltimore and DC areas. Valerie is building a performing aspect to the Duncan technique in the Maryland and DC areas with performances throughout the year. Her new choreographies in the Duncan Dance technique have been well received and performed around the country, including the National Portrait Gallery, Freer/Sackler Gallery of the Smithsonian, National Cathedral, Clarice Smith Performing Arts Center, Paris/Ballys in Las Vegas, Mercy College in New York and many other venues.

Valerie has helped spearhead the formation of the Isadora Duncan International Symposium as an original member of the Organizing Committee. The organization aims to bring together practitioners of the Duncan community to expand the reach and breadth of the Duncan work throughout the world. She currently also serves as the Chair of the Isadora Duncan Archive committee and project.

Since discovering Duncan Dance in 1992, Valerie has focused on building, preserving and learning more about Isadora's gorgeous, timeless and inspired technique of dance and repertory of dances. Valerie firmly believes that Duncan Dance is a vital aspect to the dance of today and that all dancers can benefit from its unique focus on musicality, artistry, personal expression and openness. She is working to innovate the Duncan technique for the 21st Century with contemporary music selection, expanded and developed movements and challenging choreography. 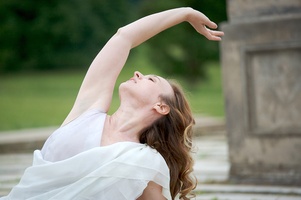 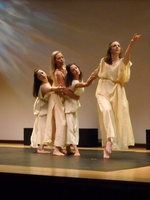