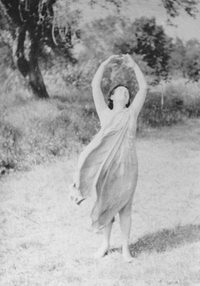 GERBER--Louise Craig Jacobs. Wife of the late Dr. Leon Gerber, mother of Robert of Bedford Hills, N.Y. and Merrell Eve and Edie Mackenzie of Vancouver, Canada, sister of Pearl and George, aunt and loving friend, passed peacefully at home in Laguna Hills, CA on Saturday May 24, one month to the day before her 88th birthday. Louise graduated Hunter High, Hunter College and Cornell University, with an MA in play production. An original member of the Actor's Lab in Hollywood, she worked regularly in radio while translating Bertolt Brecht's plays and teaching English to many prominent German artists who fled Nazi Germany. Upon returning to N.Y., she acted on Broadway and worked at the Phoenix Theater. She directed countless plays at the Chappaqua Drama Group and the Schoolhouse in Katonah and continued directing after moving to Laguna Hills, CA. Louise was a remarkable, brilliant woman who, as an artist and enlightened thinker, was a mentor to many. A second generation Isadora Duncan dancer, trained by Anna and Irma Duncan, she went on to train the next generation of dancers. Her sense of humanity and justice was present in everything she did. Louise was loved by many and we will cherish her always and celebrate her life: one lived so fully.

The Collection of Louise Craig Gerber